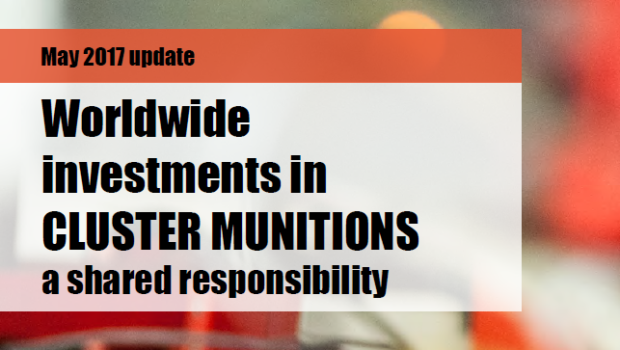 Cluster bombs are banned under international law since 2008, because like landmines, they maim and kill indiscriminately. Despite the fact that a growing number of states are signing up to the cluster bomb ban, total investments have increased from US$ 28 billion in the 2016 report to US$ 31 billion in the 2017 report. Although many banks and other financial institutions now also ban these investments, the numbers investing worldwide has also increased from 158 to 166 this year.

“Cluster bombs are banned and would not be produced without funding. We have all seen the misery they cause in Syria and Yemen – how can blue chip banks continue to invest in producers of such horrendous and banned weapons – do they simply not care? Companies which produce cluster munitions are unacceptable business partners; from the US to China, banks need to take responsibility with more ethical investments.” said Maaike Beenes, from the PAX Disarmament Program.

US banks and financial institutions make up 69% of global investments: The 10 largest investors in the report are T. Rowe Price (1.8B), Vanguard (1.7B) JPMorgan Chase (1.3B), Black Rock (1.25B), Bank of America (1.1B), Textron Pension Fund (1B) Mitsubishi UFJ Financial (914M), China Construction Bank (903M), Wells Fargo (871M) and Capital Group (848M). US companies are also the top 5 in the Hall of Shame, which lists financial institutions investing in cluster munitions producers.

More investments by Asian financial institutions: 69 (out of 166 globally) have increased their investments into surveyed cluster munitions producers by almost US$ 1 billion, to over US$ 7 billion of the 31 billion invested. The report lists 30 investing companies from China, 27 from South Korea, 5 from Taiwan, 4 from Japan, 2 from Singapore and 1 from India.

“China has shown some leadership on climate change, but along with Japan and South Korea, it is at the bottom of the class when it comes to investments into banned weapons – this needs to change”, said Maaike Beenes, from the PAX Disarmament Program. “It is unacceptable that Japanese financial institutions continue to fund companies which produce horrendous weapons – the government needs to show leadership in the region and to prohibit all investments into producers of cluster bombs”, said Motoko Mekata, vice-president of the Japan Campaign to Ban Landmines (JCBL).

Since the initial publication of the report in 2009, much progress has been achieved. Five of eight firms listed in the first report in 2009 for involvement in the production of these weapons, have announced their intentions to cease production.

Most recent example: in August 2016, US-based Textron announced it would end the production of its cluster bombs. These weapons were used in Yemen by the Saudi-led coalition in 2015 and 2016, leading to civilian casualties, as reported by Human Rights Watch and Amnesty International. Because of Textron’s involvement in the production of these cluster bombs, many financial institutions, especially from Europe, excluded Textron investments from their portfolios.

PAX welcomes the Textron announcement to stop producing cluster munitions, but because Textron will continue to deliver Sensor Fuzed Weapons throughout 2017, the company is still included as a cluster munition producer in this report. This also goes for Orbital ATK, which produces the rocket motor for Textron’s cluster bombs.

“We hope Textron sticks to its promise to stop producing cluster bombs but until they do, investors need to keep a close watch on them.” said Maaike Beenes.

If indeed Textron stops delivering cluster bombs by the end of 2017, the only producers left on the red flag list are Asian companies. Also, many financial institutions from Asia invest in these cluster bomb producers. This shows it is time for Asia to step up and stop these unethical and irresponsible investments as well as the production of these horrendous weapons.

In recent years, civil society campaigns and clear guidelines set by governments have resulted in further disinvestment. Several states now have legislation prohibiting (forms of) investments in cluster munitions, while other State Parties to the Cluster Munition Convention clearly state they consider investments to be prohibited by the Convention. Campaigners are calling on all governments to follow their lead.

“We cannot simply abdicate responsibility to banks – governments also need to ban explosive investments. Canada, France, Germany, Japan, Spain, Switzerland and United Kingdom need to step up to the plate and make public statements prohibiting all forms of investments into producers of cluster bombs at the 7th Meeting of States Parties to the Convention, in September this year in Geneva.” Said Firoz Alizada, Campaigns and Communications Manager at the Cluster Munition Coalition.