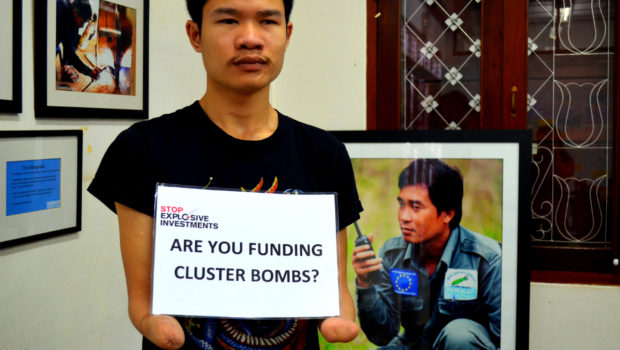 According to the report ‘Worldwide Investments in Cluster Munitions: a shared responsibility’ published today by Cluster Munition Coalition member PAX (the Netherlands), the US$31 billion investment by 166 financial institutions went to six companies that produce cluster munitions. Of the six, two companies are located in China (China Aerospace Science and Industry and Norinco), two in South Korea (Hanwha and Poongsan) and two in the U.S. (Orbital ATK and Textron).

“Cluster bombs are banned for a clear reason, because they disproportionately harm civilians, as is the case with the ongoing use of cluster munitions by Syrian and Russian forces in Syria and by the Saudi-led coalition in Yemen. That is why no banks or financial institutions should put a penny in companies that produce these illegal and harmful weapons, and no company or country should produce cluster munitions,” said Firoz Alizada, Campaigns and Communications Manager at the Cluster Munition Coalition.

“It is unacceptable to see an increase of US$3 billion investments in producers of cluster bombs in 2017 in comparison to 2016. Nonetheless, we are pleased that Textron, a major producer of cluster bombs in the US announced last year that it would cease the production of cluster munitions and that, by the end of 2017, the company will have no involvement in the production of these weapons,” said Maaike Beenes, co-author of the PAX report. “We will be following closely to see if Textron does indeed end all involvement with cluster munitions this year. We also call on all other companies to stop producing cluster bombs without further delay,” she added.

Further resources for the media

Notes to the editor: