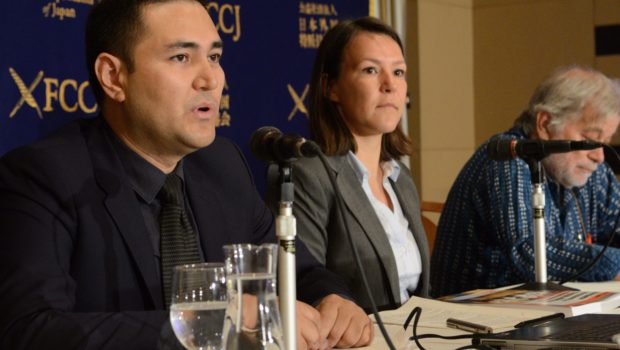 On Tuesday May 23, the 2017 update of the report ‘Worldwide Investments in Cluster Munitions’ was launched in Tokyo (Japan) with a press conference. The CMC, PAX, and the Japanese Campaign to Ban Landmines (JCBL) also met with representatives of members of the Japanese Parliament, Ministry of Foreign Affairs and the Government Pension Investment Fund to exchange on the findings of the report.

The full press conference can be viewed on YouTube here: https://www.youtube.com/watch?v=TUx6z43QSHc

At the press conference, the findings of the 2017 update of the report were presented. The report shows that in the last 4 years, 166 financial institutions invested US$31 billion in 6 companies involved in the production of cluster bombs. This is an increase of US$3 billion compared to the 2016 report.

CMC, PAX and JCBL in front of Mitsubishi UFJ Financial Group (MUFG) offices in Tokyo. MUFG is one of the Japanese financial institutions that still invest in producers of cluster bombs.

The JCBL, CMC and PAX also met with representatives of the Japanese Ministry of Foreign Affairs to urge the Japanese government to start playing a leading role in ending investments in cluster bomb producers, not only by making it possible that GPIF no longer continues these investments, but also by adopting national legislation prohibiting such investments altogether. It should also work towards increasing the universalisation of the CCM in its own region: although Japan itself joined the CCM already in 2008, its neighbours China and South Korea remain outside of the treaty, and continue to produce and stockpile cluster munitions. Japan has a responsibility to encourage its neighbours to join the treaty banning those weapons.

Members of Parliament can also play an important role in ending investments in cluster bomb producers, by encouraging their government to adopt national legislation prohibiting those investments, or by proposing legislation themselves. At a meeting at Japan’s Diet, the Parliament, several of its members indicated their conviction that investments by Japanese financial institutions in cluster bomb producers should end.

We hope that the focus on the Asian region that was generated by the launch in Japan will continue to have a positive effect, as well as supporting the JCBL in encouraging Japan to start playing a leading role on this issue.

The launch of the report was covered among others by Thomson Reuters, Mainichi newspaper and Abema TV. More media coverage of the launch is compiled here.

The full 2017 update of the report ‘Worldwide Investments in Cluster Munitions, a shared responsibility’ can be downloaded here.