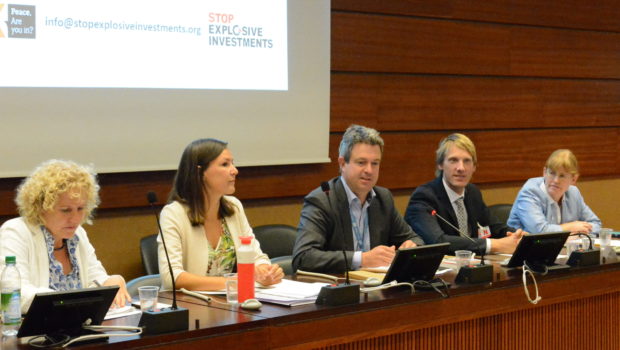 During the annual meeting of states parties to the Convention on Cluster Munitions (CCM), states have collectively condemned all use of cluster munitions, including recent use in Syria and Yemen. Several states also called to end investments in cluster munitions producers.

There was also good news, as the CCM welcomed new state party Namibia. The total number of states parties and signatories of the Convention is now at 104 and 120 respectively.

Several states expressed their view that they understand investing in cluster munitions producers to be prohibited. Montenegro, which had not previously expressed its views on the issue, stated that:

“We would like to express our support for the Dubrovnik Action Plan, as a valuable guideline for further implementation of the CCM. We emphasize that investing in or financing prohibited weapons production undermines the international legal framework that governs their ban. Therefore Montenegro understands that any investment in producers of cluster munitions is a contravention of Article 1 (1) c of the CCM.”

During the plenary sessions, Belgium, Chad, Gambia, Ireland, Mauritania, Montenegro, the Netherlands, New Zealand, Peru and Spain made similar statements reaffirming that investing in cluster munitions or their producers is prohibited under the CCM’s provisions.

New Zealand, coordinator of a working group on measures for national implementation of the Convention, also called on other states to follow this example:

“We recognize that CCM States Parties have differing views on divestment. At the same time we welcome the opportunity provided by our Convention to consider the practical contribution divestment can make to achieving the objectives of our Convention. Acknowledging the reference to divestment in the Dubrovnik Action Plan, as well as the invitation for delegations at this Meeting to exchange views on how to address the issue of investment in cluster munitions, we hope that this community will be interested in sharing their experiences and in taking work forward over the coming year.”

To view all statements delivered by states during the 8th Meeting of States Parties, please see here.

The panel from left to right and Eva Maria Fischer (Manager advocacy and development education for Humanity and Inclusion); Maaike Beenes (co-author of the Worldwide Investments in Cluster Munitions report), Richard Lennane (Geneva Disarmament Forum and moderator of the panel), Michel Uiterwaal (project leader cluster munitions at PAX) and Bonnie Docherty (associate director of armed conflict and civilian protection and lecturer on law at the Harvard International Human Rights Clinic).