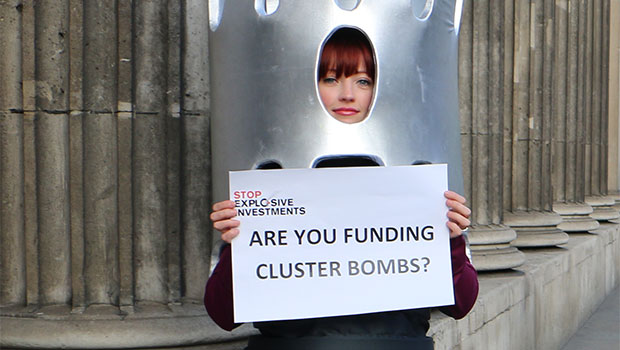 From Canada, CI Financial, Manulife Financial, Royal Bank of Canada and Sun Life Financial are also included in the Hall of Shame. Jointly, these Canadian financial institutions invested US$565 million in cluster munitions producers between June 2012 and April 2016.

The report by Dutch peace organisation PAX was released today in Ottawa, together with the Cluster Munition Coalition and Mines Action Canada, to put pressure on Canada and other governments to put an end to these investments.

“It is an absolute outrage that financial institutions are investing billions into companies that produce weapons which are banned under international law”, says Suzanne Oosterwijk, author of the PAX report. “Canada has also banned these weapons. It is time for financial institutions to stop disregarding the international norm with these explosive investments into producers of illegal weapons that maim and kill civilians.”

Cluster munitions are banned under the 2008 Convention on Cluster Munitions (CCM) because they kill indiscriminately. The report looks at investments into a shortlist of seven companies involved in the production of cluster munitions. These are China Aerospace Science and Industry (China), China Aerospace Science and Technology (China), Hanwha (South Korea), Norinco (China), Orbital ATK (US), Poongsan (South Korea) and Textron (US).

Textron produces the CBU-105 Sensor Fuzed Weapon. This weapon, banned under the CCM, has been used by the Saudi-led coalition in Yemen, reports by Human Rights Watch and Amnesty International have shown. On 27 May 2016, the United States suspended the transfer of these CBU-105 Sensor Fuzed Weapons to Saudi Arabia because of concern at the use of cluster munitions in or near civilian areas.

Pressure from the financial sector can make a major contribution to a world without cluster munitions. The company Singapore Technologies Engineering announced publically in 2015 that it has terminated its involvement in cluster munitions.

Four of these are from Canada, where the CMC, Mines Action Canada and PAX are calling for disinvestment today. Canada has declared that it considers investments to be banned under its current legislation. Activists are calling on Canada to show leadership by ensuring these investments end.

As well as a “Hall of Shame”, the report also includes examples of good policy practice. In the “Hall of Fame” and “runners-up” category, 84 financial institutions are credited for having cluster munitions disinvestment policies in place. This is up from 76 in the November 2014 report update.

Since the initial publication of the report in 2009, much progress has been achieved. From the original eight firms included on the report’s so-called red flag list for involvement in the production of these weapons, four companies have since announced their intentions to cease production. In recent years, civil society engagement and the clear guidelines set by governments and financial institutions have resulted in further disinvestment. However, as it can be seen in this report, a lot still needs to be done.

Although the CCM does not explicitly prohibit financial investments, it can be interpreted as a form of “assistance”, which is prohibited under Article 1(1)c of the Convention. An unprecedented and positive development is that states are now also legislating against investments in cluster munitions. Ten states in total have adopted legislation that prohibits (forms of) investments in cluster munitions: Belgium, Ireland, Italy, Liechtenstein, Luxembourg, the Netherlands, New Zealand, Samoa, Spain and Switzerland. In addition, 28 other states that joined the CCM did not legislate (yet), but stated they consider investments to be prohibited by the Convention.

“Growing leadership by countries taking action against investments in cluster munitions is a great step forward,” said Megan Burke, director of the international Cluster Munition Coalition, “Now all governments that have joined the life-saving Convention on Cluster Munitions must follow their lead. Cluster munitions are banned — not a single penny should go to companies making this horrendous weapon”, Burke added.

The report “Worldwide Investments in Cluster Munitions; a shared responsibility” was written and edited by PAX (the Netherlands), who commissioned Dutch research company Profundo to gather the data for the Hall of Shame and Hall of Fame and runners-up sections of the report.