Disinvestment campaigners in Australia are celebrating a policy shift by one of Australia’s largest banks. In recent months, ANZ Bank

On 6 July, Handicap International and Amnesty International France issued a press release welcoming the prohibition of direct and indirect

AFP http://news.smh.com.au/breaking-news-world/japan-banks-ban-financing-cluster-arms-20100730-10zkw.html Japan’s three largest banks said on Friday they would refrain from financing the manufacture of cluster bombs, two

Switzerland is poised to join a number of countries that have outlawed investments in cluster munitions, after the Swiss National 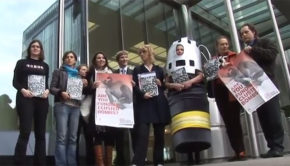 Cluster bombs are banned under the 2008 Convention on Cluster Munitions, but 138 banks and other financial institutions are still