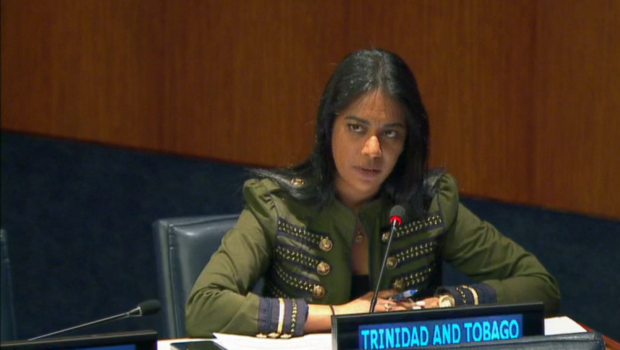 Ms. Roopnarine delivers the statement on behalf of the Republic of Trinidad and Tobago.

From 28 September to 2 November 2017, states gathered in New York for the First Committee of the United Nations General Assembly. This committee deals with global issues of disarmament, peace and security.

During the committee’s discussion of the issue of conventional weapons, representative of the Republic of Trinidad and Tobago ms. Roopnarine issued the statement that Trinidad and Tobago consider investments in cluster munitions to be prohibited under the Convention on Cluster Munitions:

“It is unambiguously clear that investing in or financing prohibited weapons undermines the international legal framework that governs their prohibition. My country’s accession to the CCM demonstrates our continued commitment to join efforts  to end the terrible harm posed by these indiscriminate weapons. We therefore share the perspective that investment in the production of these weapons are a contravention of the CCM.”

Trinidad and Tobago is the 40th country to join the growing group of states that consider investments in cluster munitions and their producers to be prohibited under the CCM.

The Stop Explosive Weapons campaign welcomes the statement by Trinidad and Tobago. This type of statements strengthens the international norm that investment in producers of cluster munition producers are prohibited under the Convention.

Please refer to our 2017 update of the Worldwide Investment in Cluster Munition report for reference to other States that have expressed the view that investment are or should be prohibited. The report also shows how these statements have contributed to the reduction of investments in cluster munition producers. A condensed overview is also available here.

The statement by Trinidad and Tobago can be viewed on the UN website here (from 1:10:42 onwards).